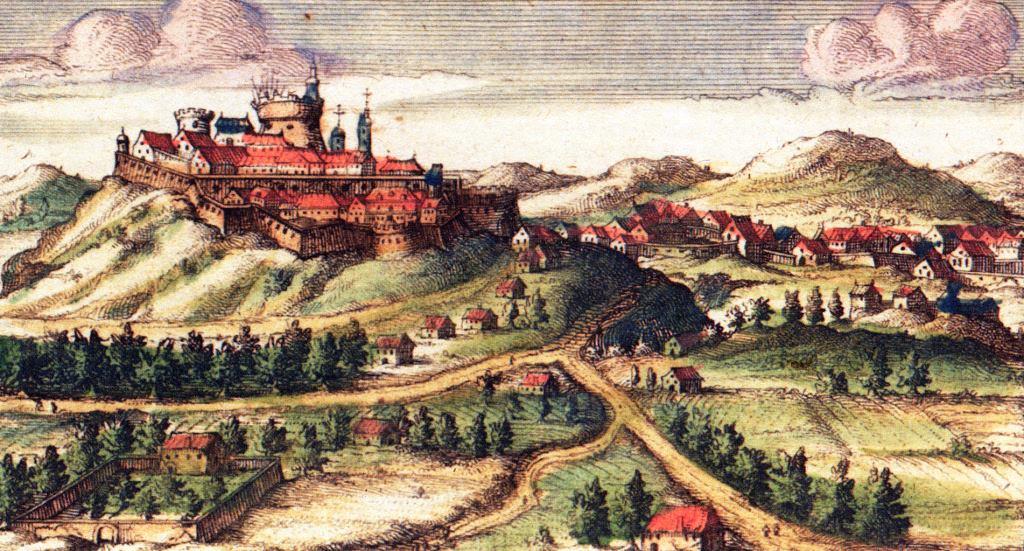 Evridiki Livada: THE HISTORY OF THE CASTLE OF SAINT GEORGE OF KEFALLINIA, HIS SOVEREIGNS AND CITIZENS (Part 1)

The hill on which the Kefallonian fortified monument, the old capital, the Castle of St. George was built, is host to a strange universe, a message bearer, a natural stronghold worked on stone, with stone and wood, earth and water. A place open to the Gods and the sky, air and light, warmed by the age old footprints of its visitors, a place of a unique energy serving faithfully the historical memory, full of the continuity of the ages, with a mystical relation to Kefallonian nature, the ecosystem which for years it alone protected.

It took its name from the small church dedicated to St. George, built on the top of the hill before its fortification and habitation, even before the establishment of the castle, probably by the Byzantines. During the building of the walls by the Venetians prior to 1520, a catholic church dedicated to the same Saint was built inside the compound .

The castle of St. George comprises a morphological extension of the hill, which naturally fortifies it, with bramble and thistle on the south-west side, while the mountain of Aenos provides security on the east. It was built away from the sea and the frequent pirate attacks, on a prominent location for visual coverage of the area around it. The center of the island was chosen for reasons of control. Therefore, topographical and defensive reasons contributed to the building of the castle of St. George on that particular site and its presence signifies the beginning and the end of the Venetian sovereignty in Kefallonia.

The history of the castles – besides the written accounts – is usually deduced from the architectural study of their fortified constructions. Unfortunately, even though we know from various texts and traditions that the existence of this castle goes back many centuries, the continuous man-made or natural disasters do not allow retrieval of much information. The Byzantines walked on ancient footprints, followed by the Franks and later by the Venetians. And the latest conquerors did not respect the tracks left by their fellow countrymen.

It is thought an indisputable fact that here, on the Castle of St. George, the relation to the present is refuted. Here, where the birds roost with the history and the myths, the visitor surrenders, willingly or not, to the secret enchantment of yesteryear.

There are myths about all the castles of Greece, the abandonment of which, combined with the passage of wind among the ruins, creates stories which fantasy considers serious and tradition keeps alive.

These myths relate to the construction or the conquest of the castle, the life of the nobles, its treasures, or its secret exits. Of course the secret room where the treasures were kept and the secret exits are not mythical elements only, as they existed in every castle even from initial construction.

The main features of most myths are the presence of a noble lady often cruel and domineering, the tyranny of the nobleman, the traitor who caused the fall of the castle and the villains. In those myths a historical base is present, but the facts have faded with the passing of the years and the mythical elements from people’s fantasies have been added.

In our castle there is the unique, as far as we know, myth connected to the building of the little church on the top of the hill, which ties the Castle of St. George to fairies, elves and pirates.

Even before the church was built, thick growth covered the area. Tall trees, their branches intertwined, hid even the sun light. Elves and fairies made it their home, the elves moving around the small thick forest during the night while during the day their place was taken by the fairies, beautiful girls – objects of desire – distinguished by a white transparent veil with magical qualities. He who could take the magical veil of a fairy could have her as his wife, imprisoning her in a way, keeping her as long as he had the veil, the symbol of her freedom. If she took it back, she was free to return to her ethereal friends. When the wind blew, something usual in the area, the voices of those magical beings would reach the villagers at the foot of the hill, intensifying their fear, increasing in their fantasies those intangible shapes, automatically giving them human form. Nobody dared enter the forest on the small hill, preserving thus the thick growth. At some time bad weather smashed a pirate boat on the rocky coast, southwest of the hill. The pirates soon found shelter in the small forest, coming out during the night to steal what they needed from the villagers. The presence of the pirates confirmed the fears of the local people for fairies and elves. Circling the forest they set fire to it, burning the pirates along with the plants and animals. Their screams stirred the conscience of the reluctant arsonists. Wishing to atone for their actions, they built a little church on top of the hill and dedicated it to the Saint who slew the dragon, St. George. When the Byzantines later built the castle, they enclosed the church and gave its name to the stronghold on the hill.

Another myth refers to the secret hideaway of the castle. It was believed that the north tunnel, crossing underground the valley of Crani, leads to the Coutavos lagoon, forming a secret exit for those inside the castle. The exit, hidden in darkness, had generated stories like the one that had two Englishmen going down the tunnel but never coming back. Reasons given for their disappearance were the existence of explosives or the total luck of air. “Some were lost, some were killed by fumes, some were eaten by wild animals and others were killed by explosives”. Finally, rocks closed off the tunnel’s entrance.

There is also a myth about hidden treasure in a secret crypt inside the walls, supposedly the great treasure of the nobles, increasing in value year after year, feeding on its own fairy tales.

A Castle without knights of course is not possible. So, on “Parker’s house” , on the corner of the road leading to the back side of the hill, horsemen were seen moving on the wall. Venetian soldiers were seen guarding the place where the Venetian Governor lived.

Seamen were also seen. One used to walk up the bell tower of St. Theodori, smoking his pipe. On the Anninos house, in the middle of the “Forum”, ghosts were appearing. They were the men unjustly killed by a Governor of the Castle inside this house. The old men of the 19th century remembered the bones found there.

Actually, a place like the Castle of St. George, with such long-lived habitation, with trees creating shadows moving in the wind, is impossible not to be “visited by ghosts”. 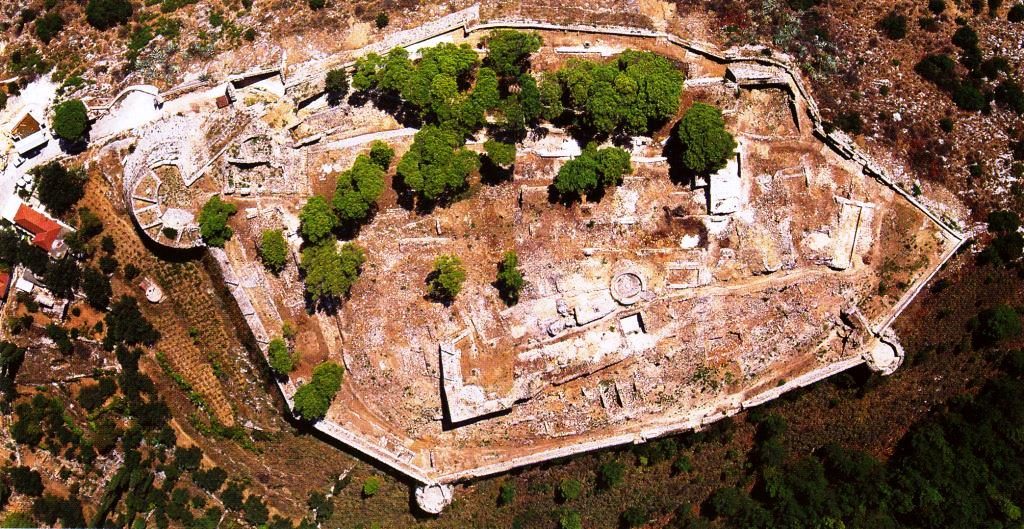 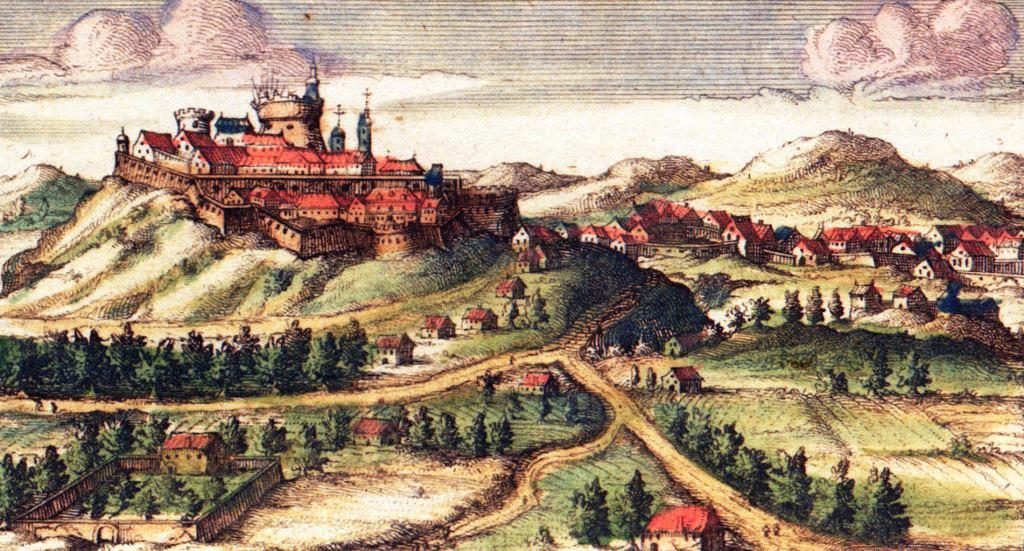 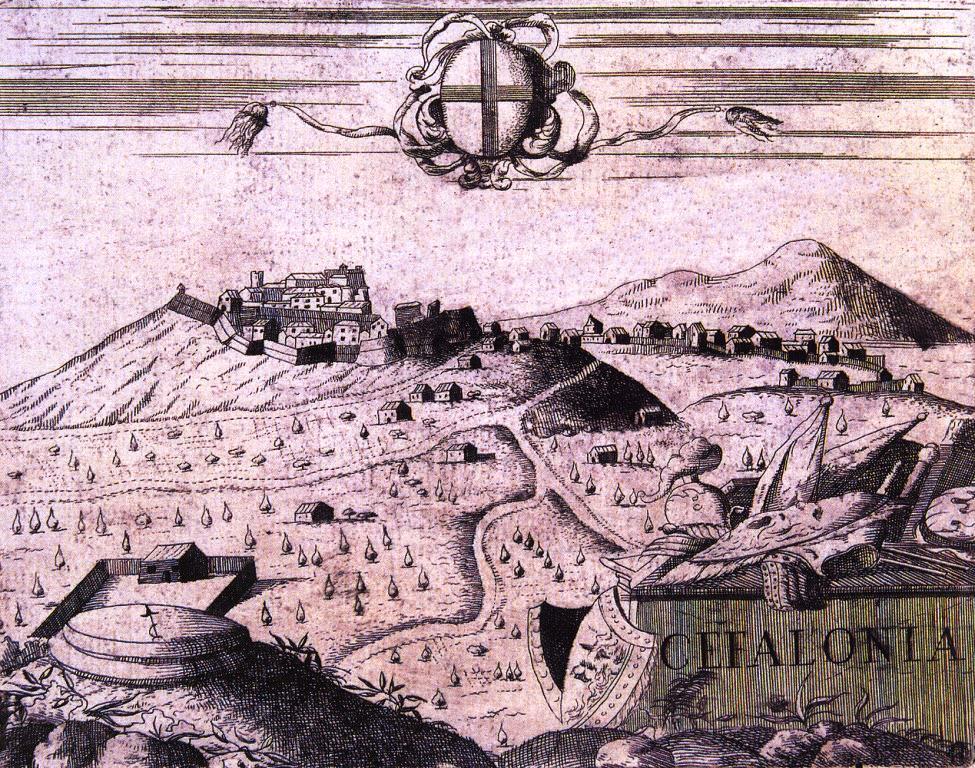 The castle of St. George is mentioned in various documents by several names: Cafalonia, Fort Georgi, Sancti Georgii in castro, Castelo di Cefalonia, Cefalonie, Zafalonia, kalai-i-Kifalonia Castelo de San Zorzi, Fortessa di San Ziorgi, Borgo, Fortezza, Fortress and Tower of St. George, City of Kefallonia, Inner Borgo, City of the Rock, -citta della rocca. Whichever name is given to this medieval capital of the island, its architecture, military fortification and harmonious formation are among the best in the Mediterranean. Recounting what we know about the fortunes of the island’s masters through the barbarism of the dark medieval times, we unfold the history of the castle and the history of the island of Kefallonia itself, which has also been called Island of St. George .